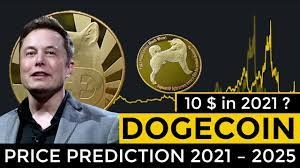 AMC CEO Adam Aron announced that the company will work towards accepting Dogecoin.

Elon Musk’s interest in Dogecoin is no secret. In fact, he had even declared that he wants to put the cryptocurrency on the Moon. Now, Musk had presented another take on Dogecoin, sending ripples across Twitter. The SpaceX and Tesla founder has declared on the microblogging site that the Dogecoin handling fees should be reduced to make purchases such as movie tickets “viable” to the average consumer. Musk was replying to a tweet about AMC accepting Dogecoin. The tech billionaire wrote in response, “Super important for Doge fees to drop to make things like buying movie tix viable.”

What is the Dogecoin price today?

The current price of Dogecoin is 0.2077 USD today.

Is it profitable to invest in Dogecoin?

According to our predictions, this won’t happen in near future.

According to our analysis, this will not happen.

Will Dogecoin hit 1 USD in a year?

Not within a year. See above.

Will Dogecoin hit 5 USD in a year?

Not within a year. See above.

Will Dogecoin hit 10 USD in a year?

The first tweet by co-creator of Dogecoin Billy Markus in this regard referred to the news of AMC CEO taking steps to accept the cryptocurrency and talking about its popularity. “Robinhood announcing wallets, AMC CEO not only talking about accepting Dogecoin but saying it was the single most interacted with a tweet he has ever made, the crypto market finally seeing some green. I gotta say…” followed by a meme that said that “today was a good day,” wrote Markus, who goes by the name Shibetoshi Nakamoto on Twitter.

American movie theatre chain AMC announced earlier this month that it would accept Ether, Bitcoin, Bitcoin Cash, and Litecoin for ticket purchases by end of this year. Dogecoin was not a part of the initial list.

However, after the announcement, AMC CEO Adam Aron asked users on Twitter if the company should include Dogecoin on the list. The poll results were in favor of Dogecoin as a payment mode and the tweet even saw a “like” from Musk.

Acknowledging this, Aron wrote, “I never thought I would see this day. Elon Musk liked my Dogecoin Twitter poll tweet. If you happen to see this tweet too, Mr. Musk, congratulations on Tesla and SpaceX. I have strived to be an innovator my entire career, but you Sir are the epitome of innovation above all others.” He also attached a picture of poll results to the tweet.

Aron further announced that the company will work towards accepting Dogecoin. He also said that the poll was his “highest ever read tweet” so far, recording 4.2 million views in 24 hours.

2021-09-24
Previous Post: Heart-Attack and its ultimate treatment
Next Post: No Time to Die’ James Bond premieres next week ‘A Big Event’