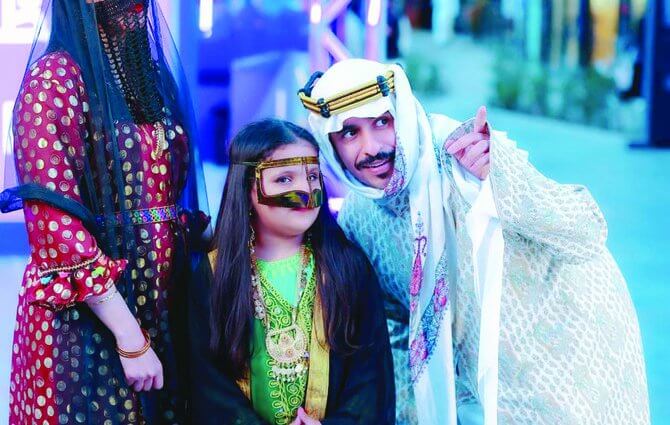 Saudi Arabia’s cultural costumes come to life on Founding Day. Putting the golden corded agal (headband) on his head as his grandfather did before him, and placing the brown Bisht (cloak) over his shoulders, Turki Abothnain felt proud to be in Boulevard Riyadh City to celebrate the country’s first Founding Day on Tuesday.

“I feel so emotional wearing our traditional clothes because we needed to be reminded where it all started,” he told Arab News. “I am wearing the uniform of the central region and my brother is wearing a uniform called daglah with belts. Daglah is a kind of heavy top that is worn on the white thobe.”

Lina Al-Hessaini, from Madinah, wore a white dress and a veil from the western region. She said that this style of dress used to be worn in the past on special occasions.

“Our grandmothers used to wear this in weddings and on other occasions like baby showers, and my brother is wearing the Hijazi headband. It’s something that we always wear in Ramadan and Sha’aban months,” she told Arab News.

For foreign visitors who found themselves in Riyadh that evening, the display of traditional Saudi clothing sparked surprise and delight.

Theo and Caren Clainon, from South Africa, expressed the joy they felt at seeing the Founding Day celebrations and outfits.

“Everyone here is so friendly and we love the cultural costumes. Honestly, we wish we knew (because) we would have worn a costume too and we love this initiative because not all countries have this day,” they told Arab News. “We saw a baby with golden bangles. She was so cute and we loved the dotted dresses. The diversity in the costumes – like everybody is celebrating everybody.”

Muataz Mosa Al-Dawsari was wearing the Najdi (central region) traditional costume because it captured the heritage of his parents and grandparents.

“I chose boulevard to show off my history and to let them see how we used to look,” he told Arab News.

With his braided long black hair and crossed belts on his chest, he commanded the attention of the many people who came to take his picture.

“It is a culture, customs, traditions, principles, and history that we want to teach the next generation,” he said.

Like many other women who went through their mothers’ old items to show them off on Founding Day, Huda Al-Ahmari brought along a vintage handbag and southern silverware.

This is my mom’s and it was a gift from my father, so this bag has been passed down from generation to generation,” she told Arab News. “It used to go with her everywhere back in the day to carry everything she needed, like her perfume and the traditional Arabic eyeliner and her gold.”

She said that her dress was inspired by her village, Abha Asir. At that time they only wore silver, as gold was not common in her region.

”Even this antique silver necklace I borrowed from my mother to wear for this occasion,” she added.

Ali Ati came from the southern region with his chest decorated with jasmine flowers, as Jazan is known for the floral headbands and garlands its people wear on weddings and traditional occasions.

This outfit is inspired by the Jazan heritage, which is the coastal mountain clothing in Jazan. It is a garment that has been passed down for generations and is still sold in the markets of Jazan. Plus, the jasmine flower is part of this outfit. For example, the bride in Jazan must be adorned with jasmine from her head to toe,” he told Arab News.

“Founding Day is a special day because you see more than one culture in different outfits, ‏and we celebrate our differences. It’s an honor to every Saudi.”

Moudi Al-Rubiaan dressed her daughter Abrar Al-Twairqi in a white and golden dress inspired by the heritage of Madinah and Taif.

“Founding Day showed the beauty of women and authentic Arab dress. I feel like I’ve gone back in time and I’m living in an era I really missed 30 years ago when I was a kid. My children were asking earlier this day if I used to look like this always before and I proudly said yes,” she told Arab News.

With emotion in her voice and tears in her eyes, she said: “I hope we can live like this always and show the next generation our time and how we lived.”

2022-02-23
Previous Post: Cryptocurrency is on the face of ultimate declination will it regain its position?
Next Post: Djokovic loses world number one ranking to Medvedev in Dubai